Usually I like to use gear for quite a long time before I review it, but I'm really excited about this one and wanted to share that excitement.

I've been thinking about how to cut weight while not using plastic, and I started to think how silly it is that I have this water container in my backpack which I can only store my pot and stuff up. If the top of my cookpot screwed on, I could use it for extra capacity on the rare occasion that I need it. On more minimal trips, I could just bring the one container.

I've tried a kleen kanteen food container for this, but it has a couple of flaws. 1) It's too small, I eat too much to use a 16 ounce container to cook in. 2) the threads on the lid are still plastic, so it doesn't meet my criteria. As a third flaw, it's quite heavy.

The Vargo BOT solves all of these problems, and quite elegantly too. It's 1L and titanium. The only plastic in it is the silicone ring used to seal it. to make it stiff enough to seal properly it has a small lip at the top of the pot, which makes it easier to use as a bottle, like so: 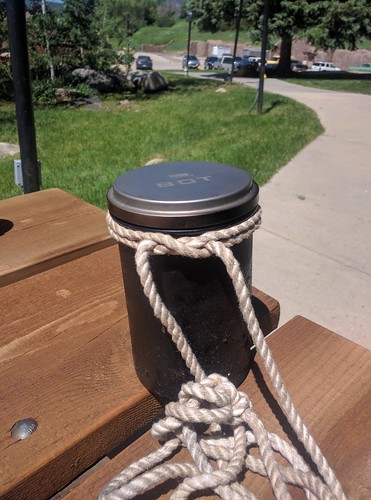 I've been using a 1.3L pot, a 1L pot is a little small to cook 2 Knorr sides in, but it works if you're careful, you just have to use only 1/2 cup of water, and keep the boil mild (tricky when using fire, but doable). When using it on a fire, the top lip cools pretty quickly, so it's easy to eat out of actually. Obviously it has no handles, I'm fairly used to this from a previous cookpot, but it could be a big downside for some. I was using the bandana seen in the background to pull it on and off the fire. 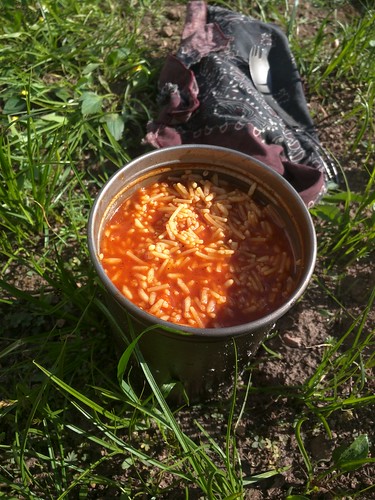 This pot has another neat trick up it's sleeve actually. The silicone ring rolls off the top easily, and if you flip the lid over it has a bump that sits just in to the pot. This allows you to use it as a lid for speeding up the boiling of water (which I did, and it worked well). 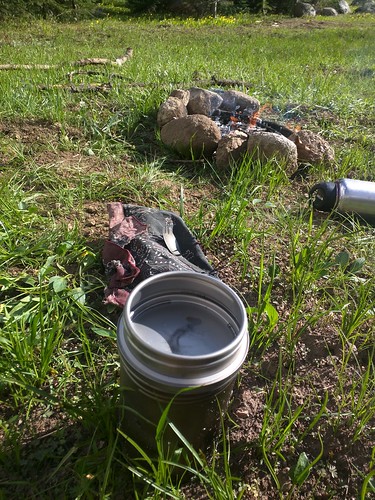 Obviously there are downsides to combining your bottle and pot. For one, if you need to boil 2 cups of water, and have a liter in your bottle, you'll have to dump out 2 cups of it... this could be an issue if you are dry camping and were hoping to keep everything full. It's also a little narrow and tall, so there's less surface area on the bottom for heating with a stove, and it's a little less stable in the fire. I think the BOT balances these issues well and is just wide enough to still work well (about the same width as my 40 oz kleen kanteen), yet still be easy to hold in your hand and drink from as well as fitting in most water-bottle holders. It's very close in dimension to the old Nalgenes everyone used to carry before the BPA scare.

Lastly, some folks seem to have trouble opening it. I've always had a lot of hand-strength, and I rock-climb, so I've had no trouble, but if you're always asking your S.O. to open jars for you this pot might not be a good fit.

Oh, and yes... it does NOT leak. This surprised me a lot, but it seals great, and hasn't leaked on me yet.

This is *definitely* going to become a part of my kit for almost all trips. For thru-hike style trips I'm still deciding whether to carry it as a primary bottle (for which it works wonderfully), or as a cookpot capable of holding extra water when needed (for which it would be ideal if I ate less food). I'm actually really tempted to get a second and actually just use one for each.

For minimal/bushcraft type trips this is the ideal vessel. This and a knife rolled up in a wool poncho tied around your waist would be a pretty ideal summer bushcraft kit.

For full disclosure I've been using this as a bottle for about a week, and used it as a pot on one 4-day trip, so robustness is still unknown. It's stiffer feeling than any other titanium pot I've tried, with well designed rolled lips and such to give it enough stiffness to function as a bottle well, but how well it holds up to drops and bumps is yet to be seen.