Climbing, falling is a skill

I just recently completed my first outdoor 5.10 lead climb (sport). Woot! This was actually a 5.10a/b as it happened, admittedly a bit of a soft rating, but I'm going to crow a little anyway. Crossing in to 5.10's is a bit of a milestone, so I wanted to share the realization that finally pushed me over the threshold. 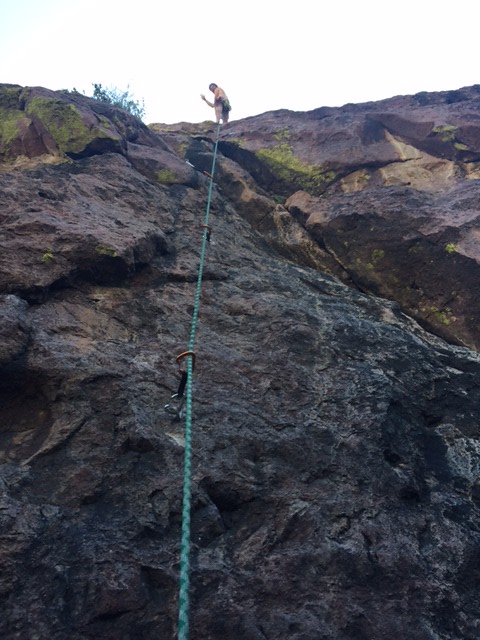 Most people learn climbing by climbing with experienced folks. I did this on my first few outdoor climbs way back ~2008/9 or so, but while on the road it hasn't been an option. As a result I'm largely self and book taught. This works, but there are some extra pitfalls involved.

In http://www.blog.smalladventures.net/2016/06/my-first-trad-climb.html I talked about my history. I was climbing in the 5.11 range toprope indoor around 2013. I didn't climb much between then and 2016 when Angie and I hit the road. 2013 and before a lot of people showed me trad placements, I took high-angle rescue courses, etc.  As it notes there I dove in to trad lead before doing sport lead, like the people did back in the day before sport climbing was a thing, and for the same reason there wasn't sport where I was at the time. As a result I started by leading 5.4 trad climbs, working my way up to ~5.7 trad. 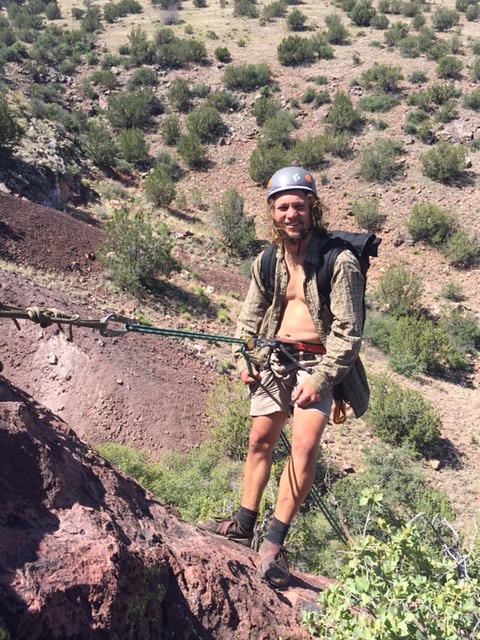 (Notice the klimbheist re pell backup Angie and I usually use, it's compact, simple, smooth, doesn't tend to jam or melt, and makes edge transitions safe and easy)

Then we started hitting sport climbing, and I started leading 5.8's. Last fall we were climbing up in New Hampshire. I was leading my first 5.9. I accidentally climbed past a bolt. Angie not wanting to interrupt my concentration didn't yell at me that I was screwing up royally. Then I blew the move while heel-hooking a ledge... I ended up dropping ~25 feet flipping over in the process, the rope caught me fall slamming me upside-down against the rock on my back. My head impacted the rock HARD. Angie bruised up her knees pretty good catching her first major lead fall, but managed to suck up probably 5 feet or rope during my fall, saving me from an even bigger whipper. Luckily my back missed hitting anything pointy (say, a bolt) and I had a helmet on which got crushed by protected my head. I had a mild concussion, but besides replacing my helmet there were no other consequences.

In contrast, on my recent 5.10 I felt pretty confident. I know I'm clipped in properly. I know that if I fall the rope will do it's job. And I know I know how to properly land the falls I was likely to take on that climb. What's the difference? 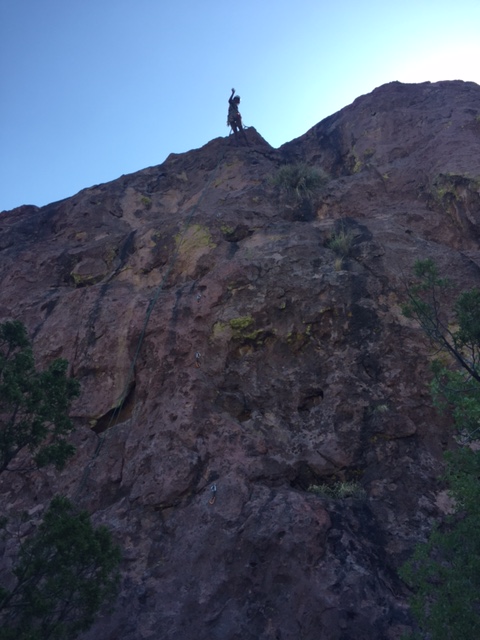 The difference is I took some practice falls. Experienced climbers are probably rolling their eyes going "Duh... idiot". Yeah, a bit, sometimes you miss the obvious stuff. For anyone else though: Start low, go up to say your second or third bolt (more rope out is better, of course), clip in, climb maybe a foot above it, and drop. Then do it from 2 feet, then with your feet above the bolt. Work up as you get comfortable.

I'd been climbing in the 5.8 range for a little while, recently while watching Angie climb lead I realized just how terrified she was of falling, and it occured to me that she needed to take some lead practice falls. As this thought passed through my mind I suddenly realized that I had the same problem. So, we took a few practice falls, not even that many, and suddenly literally the next day, She was leading 5.8's instead of 5.7's and I was leading 5.9's then a 5.10ab instead of 5.8... And we were doing it more safely!

Normally one does this when they get in to leading, but practice falls aren't an option in Trad, because every fall carries some non-trivial risk of equipment or rock failing. As a result I hadn't done it in the beginning, and I forgot to back and do it when we started climbing sport.

I'm excited, 'cause except for taking some rests, I climbed the 5.10ab clean, first try, no falls... which means it'd be reasonable for me to trad climb that route. I *should* be sport climbing above my trade level, so clearly my confidence and falling skills haven't yet caught up to my climbing ability. I'm excited to practice falling more and see where that takes me.

Next time I get on a sport wall, I'm going to take some more practice falls. I need to keep working up the runnout I'm comfortable handling. Eventually I want to practice falls (intentionally) equivalent to falling while clipping on a 15' spacing between bolts. Obviously this should be done with a lot of rope out, to keep the fall factor down.

Long story short, falling is a skill, practice it like one.