So, while I've been cooking on fires for some time. Being out east again is making me experiment more with how to cook on fires. I wanted to share a few interesting experiments.

I mentioned a while back that cooking over a fire in the eastern U.S. often means cooking with wet wood. Wet wood needs more air to keep it burning, so you need a good open fire to make it work well. There are a lot of methods for accomplishing that. 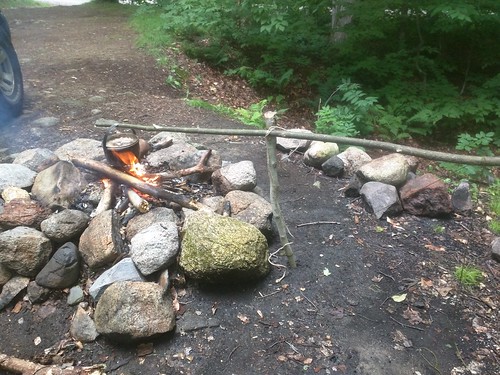 There's a pole that's been hammered in to the ground. In to this pole I cut a notch, then I lashed the arm into that notch so it would stay in place. Note that a forked stick would also work, I just happened to have a nice green stick that wasn't forked, and some twine, so I did it this way. There's a notch on the end of the arm (very hard to see in this photo) for the pot to sit in so it doesn't slide down the stick if you raise or lower it. There's also a piece of twine tied from the far end of the arm to the base of the pole using a rolling hitch on each end, to adjust it you just tilt the arm and re-adjust the rolling hitch a little.

This was my first time trying this setup and it worked better than we expected actually. It's convenient if you don't have a lot of wood available, but note that if you're fire is of any size you'll need the wood to be green. It's also nice in that there is no twine over the fire, which has a bad habit of burning up. 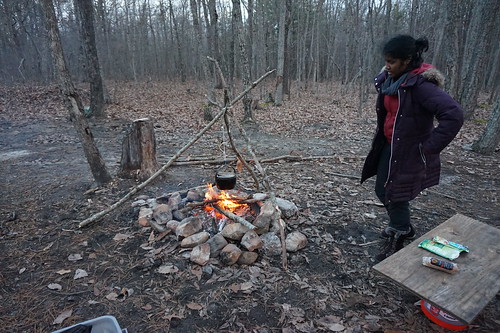 I've posted a lot of photos of this setup before. It works well with one catch. The string above the pot will melt or catch fire (depending on material) if the fire licks up over the pot too much. Using a metal or wooden hook (you can carve a wooden hook pretty quickly) can help some though. This is actually what we use most often.

Sadly I lack photos of this one, we did this on a recent backpacking trip on which we didn't bring a camera. Someone else had actually set it up and left it, so we used it with our own pot hangers. The idea is simple. It's like the pole and arm, but with two forked poles both hammered in to the ground, one on each side of the fire, and the pole goes across them. Now you have a similar problem to the tripod, you need a way to adjust how high your pot is. Take a stick with a small side-branch so it'll hang over the pole. Now, cut it to length, and carve notches in to the stick so the pot bail will sit in the notches. You can adjust the height of the pot simply by moving it from notch to notch... this is how we cooked after a heavy rain while backpacking, and it worked very well actually.

If you have a plethora of rocks, and a larger pot or frying pan this method can work well. It does tend to take more fire-tending though and is more of a dry-weather method usually. Take some 3 rocks and place then so you can balance your pot on top, the space between then can then be laced with sticks and fed ongoing as things burn. You'll need to use smallish sticks, but it lets you very tightly control fire temperature and can work very well for more complex cooking. Note that stakes work very well in place of rocks

Burn it down to coals first

When it's a bit dryer I do this a LOT, because well... I'm lazy. This dish was cooked this way in fact: 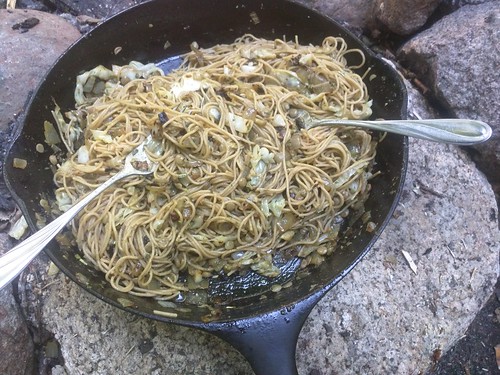 I've been looking for a picture that makes it obvious but basically I burn it down until I just have some of the larger logs left, then shift them around until they are lined up well to hold the pot over the fire. Note... sometimes you can do this even over a full-fledged fire as well, by balancing logs across the sides of the firepit, but be ready for your logs to burn out.

This is ideal if you have a frying pan which can't be hung... but burning the coals down is going to require more wood for sure.

Put the pot on the side of the fire

The simplest of all answers really. This is great for boiling water, but if you try and cook something, be ready for it to burn on one side and stay raw on the other. For pots of boiling liquid whatever is in the liquid will tend to burn to the side of the pot. That said... It works, and I've used it to cook all sorts of things. 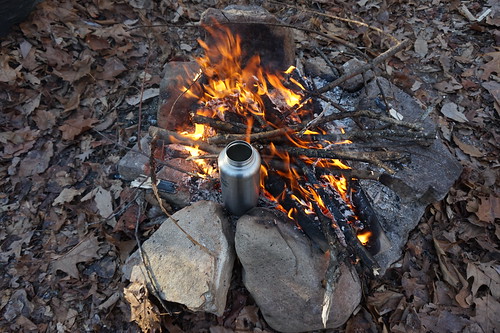 I'm throwing this in just because people forget it's an option, it's a wood stove. They are really silly in some areas, and absolutely awesome in others, it all depends on what you have to burn, and what your other options are. I love mine and used it tons on the west coast, but have barely used it on the east coast. I suspect it'll get plenty of use again once we make it out west again. 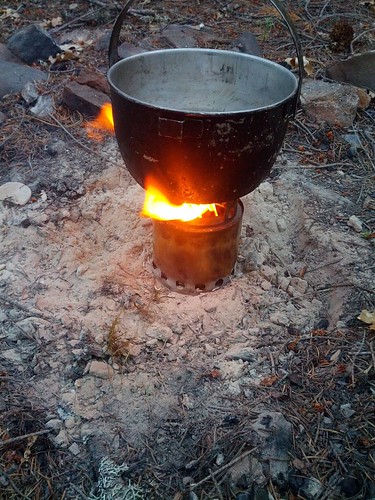 There are many more methods, but that's a quick tour of stuff I've tried. I'd love to hear if anyone else has other methods they've tried that did or did not work.

Update: Here's another one http://www.blog.smalladventures.net/2017/02/more-pot-hanging-methods.html