This post has been a long time in coming... but I've finally finished and tested another homemade poncho. 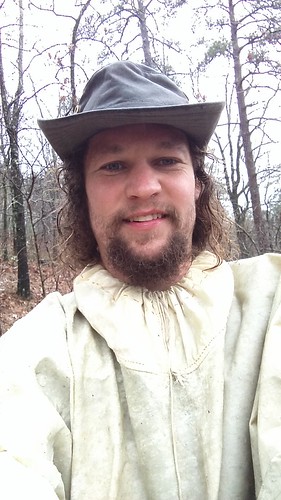 
After the above experiments I took another 5.11 shirt (left over from when I did SAR in CA), and treated it with beeswas and pure linseed oil (not "boiled"). That worked about as well as the commercial treatment, and I actually used it as my raincoat backpacking. I still basically got soaked, but slowly. 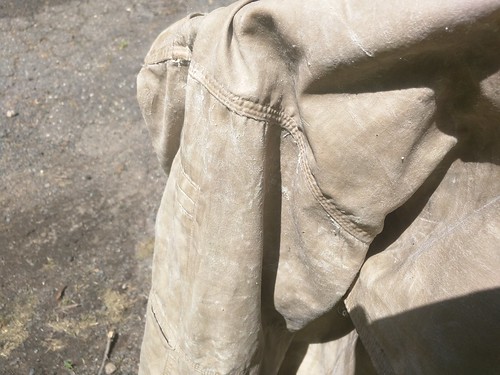 Based on that experiment my theory was that the polyester was keeping the cotton from really taking in the treatment the way I'd like and binding well in to the fabric. So, I decided I had to try it with pure cotton. I still had the bottom sheet of the 800 threadcount sheet-set, so I decided to give that a try, figuring that it's properties of shedding water once the fibers swelled might help as well. I really wasn't satisfied with my first couple of attempts at treatment though, The wax wouldn't go on evenly and it kept cracking off, so kept trying. Finally I think I figured it out. 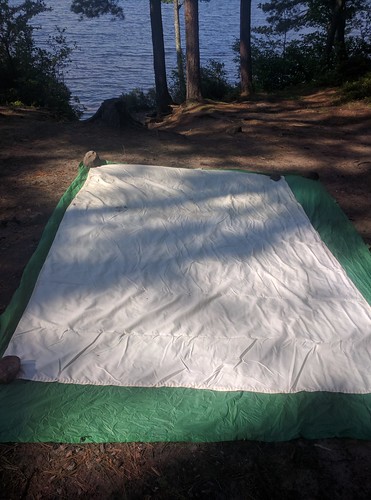 1) A bunch of beeswax (maybe a lb), dots are easiest (and cheapest), but a block will work. I did not use toilet-rings despite their cheaper price because I couldn't find any that said they were specifically beeswax and didn't have other things in them, and I wanted to get this to work with the old materials.
2) Some normal unboiled linseed oil (maybe 8 ounces)
3) A can or more of mineral spirits (turpentine should work fine too) 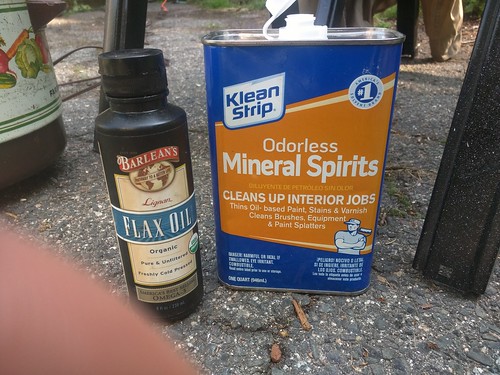 Pour all three in the top of a double boiler (I use two cooking pots that nest, with some sticks in the outer one), with water in the lower pot. Heat until the wax melts, mixture will get cloudy first, and then comparatively clear. Let cool to room temperature. This is the key, at room temperature it should still be liquid! Lay out your fabric, and paint the stuff on with a brush. The fabric should look like it's soaking wet, this means you got the mixture all of the way through the fabric. Let it dry, flip it over, and do it again... this is just to be sure it got all the way through, and get some extra was on it. Finally, let this hang in the sun a couple of days so the linseed can oxidize, the stickiness will go away and the smell fade as well. 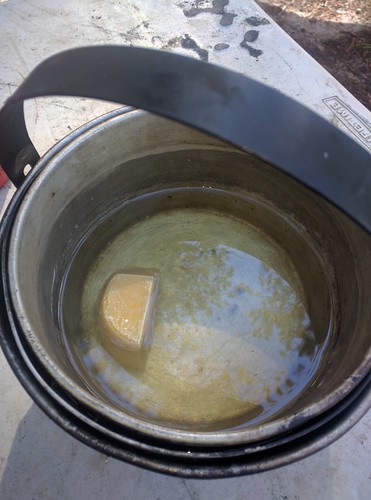 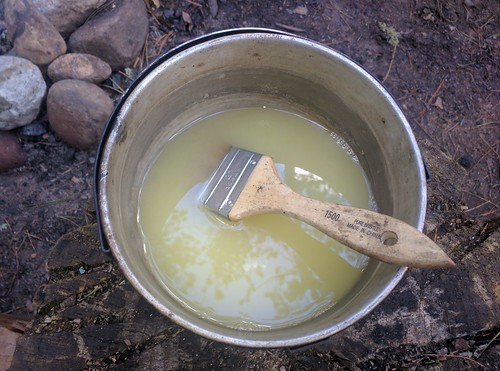 One more bit of info. From reading it seems that Linseed oil is pliable after it "dries", but beeswax is way more waterproof. Thus, as you add more linseed oil you make the final treatment less brittle (it doesn't crack off as much), but it gets a little less waterproof. My mixture above leans heavily on the waterproof side, because that's what I wanted to test first. If you want to read more about this, go read about "spar varnish" this recipe with less mineral spirits can actually be used as a spar varnish, and from what I've gathered is pretty much the original mixture called with that name (probably using turpentine instead) historically.

Note that I do NOT use "boiled linseed oil". True boiled linseed would be very interesting to try, but the product sold at the store as "boiled linseed oil" is not, it's actually linseed oil with hardeners and such in it. When I tried this on my first tarp it never dried properly and stayed sticky and stank to high heaven eve after drying for over a month on the sun.

How well does it work?
I just went for a walk for 1:15 in a moderate rain, and my shoulders are damp. Everything else that was under the poncho is bone dry, meaning also my legs down to my knees. An important other factor (given my last tarp experiment), no residue was left on my shoulders except a few crumbs of cracked off wax. If you look at classic riding coats these had a lifted shoulder panel for this reason...

There is only so much waterproofness you can expect from a thin layer of cotton, even treated. Overall, I'd say this is not good enough for a cowboy roll (for that I think you'd need a thicker cotton), but I think it will be good enough for my purposes as a rain poncho. I plan to treat my over-shirt in the same manner which is thicker and thus hopefully even more waterproof. The two together I expect to work very well even in long rains. Here's the poncho holding some water, add more though, or touch the fabric, and it starts running out. 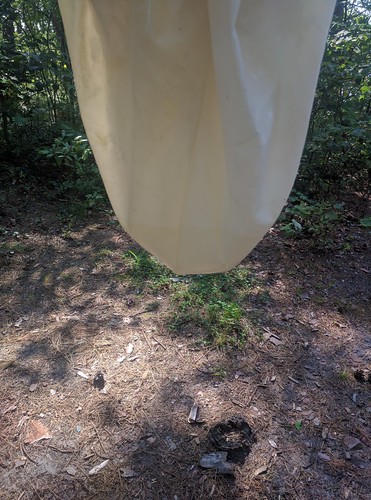 There's always more testing to do, but overall I think I'm happy with the poncho. It's a lot lighter than 10 ounce would be, and I suspect I've managed to emulate the waterproofness of a classic old (thin) tincloth. I'd be fascinated if someone has evidence to the contrary.

I've also slept out in it wrapping my alpaca fur sleepingbag, and it worked great for warding off dew. In mist, very light rain, or snow it would work fine in this capacity as well... even though I think I'd get too wet in a full-out downpour. Obviously it still works as a tarp, it worked even before it was treated for that. I've used it several times as a groundcloth and it's also plenty good enough for that.

How I made the poncho
The poncho is 8x6, so a little big as a wearable tarp. The width I just deal with, it's nice while walking and a little annoying while doing things. Tying a rope around the waist makes it far more manageable though. I think this will be okay since I'll have a wind-shirt to wear for short spurts around camp or say, if I need to do some climbing, anyway.

Clearly though, even with the rope, 8' is too long for a poncho, so it has a button-up flap in the back taking up maybe 18" of fabric. This is like a classic nylon poncho, you can open it up to cover a pack, or when using the poncho as a tarp say, as a shelter or ground-cloth (all uses I have planned). The buttons are simple stick buttons cut around the middle and tied on. The hems I did by hand.

The neck is the most interesting component. This is a separate piece of fabric that was sewn such that water would run off. I decided that full-felled seams were a PITA, so this is just a normal seam layered properly. This design allows me to cinch the neck tight so there's only a small hole while using the poncho as a tarp, or I can cinch it around my neck while using it as a poncho to help keep drips from going down it. The plan is to combine this with a hat (as in my first picture), which I often wear in the rain anyway. 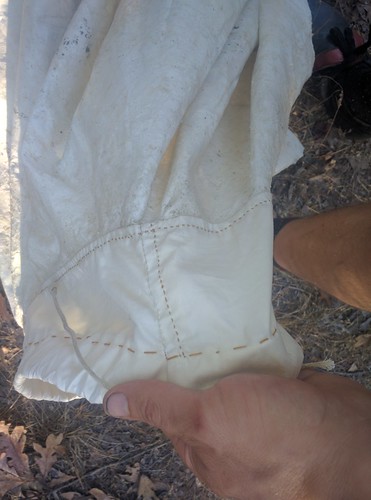 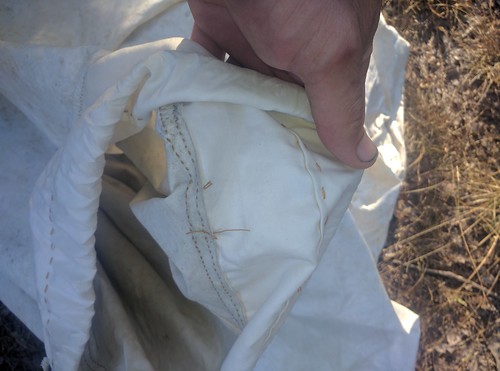 Conclusion: This recipe seems pretty decent, and a huge improvement on any other recipe I've tried. I think my final product is usable for my overall "no cotton backpacking" gear. I'm curious to try the treatment on my canvas shirt as well, and find out if a thicker fabric helps.

Lastly, here's another old post relevent to the safety of this gear
http://www.blog.smalladventures.net/2016/10/fire-safety-and-cotton-backpacking-gear.html


UPDATE:
I've added grommets to this, using the methods from http://www.blog.smalladventures.net/2017/02/myog-plasticless-backpack.html , and I'm finding it far superior to sewing on tieouts.