Last weekend I had a free evening, so I grabbed my pack and lit out. I didn't go very far at all, maybe 2 or 3 miles in from a trailhead near my house. I was taking care of Jess' dog at the time, so she came to.

This was the perfect time to test some things and just muck around. I recently bought an Opinel folding saw, which I picked it up from the mailbox on my way out. I also grabbed my little Gransfors forest axe, and my new bush knife that I bought from the maker at a gathering.

This is a lot of cutting tools to carry, but I thought I'd bring them all and play around, to see how each fared at normal camp tasks. I actually also have a true Nepalese Kukri, but I didn't bring that on this trip. 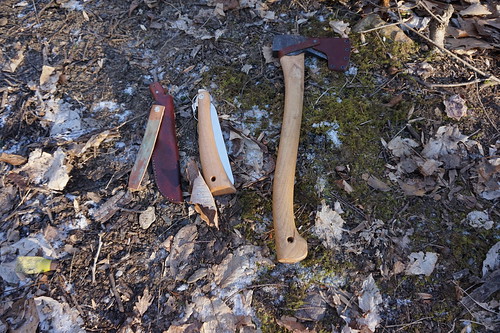 I usually carry your typical Mora knife. They are great knives, very easy to sharpen being Scandinavian grind, etc. But, while you can baton with them (hit them with a stick), the blade is a little bit thin for it. I got this bush knife with the idea that it could do heavier tasks more safely than the Mora is capable of... so, it starts encroaching on Axe territory. It's a great knife, and feels really nice when whittling and the like, but I haven't had it long enough to have a well informed opinion yet, but it's looking good.

The Opinel folding saw was a new idea. Since it's winter here I've been reading and watching videos of people who do bushcraft in the Alps. One thing I noticed is that these folks often carry folding saws. Watching them and thinking about it I realized that almost everything you do in the winter involves cutting sticks, usually in the 2-3" diameter range. Being able to cut sticks cleanly to specific lengths makes things easier, building a quick shelter, building a stand for your fire, cutting really short pieces of wood for a small fast fire, instead of having to burn the pieces in half, etc. You can always cut sticks with rocks but the rocks may be buried under a bunch of snow making that less effective. You can break sticks for sure, but it just makes some things harder, and winter is challenging enough for me right now. So, I decided to give a saw a try.

Overall, I am REALLY impressed. This is an amazing saw. A saw is really the right tool to be using when bucking up your normal deadfall firewood, much better for that than an axe. As a result it was significantly faster than the Axe. 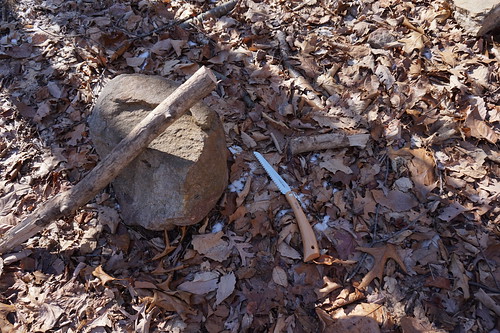 I cut about 2 armloads of wood with it, so I could keep the fire going most of the night (more on that later).

Axes and machetes and the like are quite heavy and bulky to carry. This saw is much lighter. It's just a little to big to stow in a cargo pants pocket.

If I was building shelters, I would prefer to have *both* though. If you take a small, say 18ft dead pine tree and lop off all the branches until you just have the trunk, a machete is by far the best tool for the job. Next best is an axe which is a bit slower, but compared to my machete doesn't wear out my pinky finger as badly. The saw would be a pretty distance 3'rd in that category. Given the choice of either the saw or the axe for shelter building, I think it depends on the forest I was in, but I'd probably pick the axe.

After I had a fire lit and was just hanging around I decided to make a spoon, because why not make a spoon right? The first step was to split a stick (if you're paying attention you'll note this spoon is not going to work very well). I could do this with an axe, but it's extremely gross. A knife, hit on the back with a stick, is an extremely accurate tool for splitting small branches. I then whittled this into the beginnings of a spoon shape to get comfortable with how I wanted it to come out. 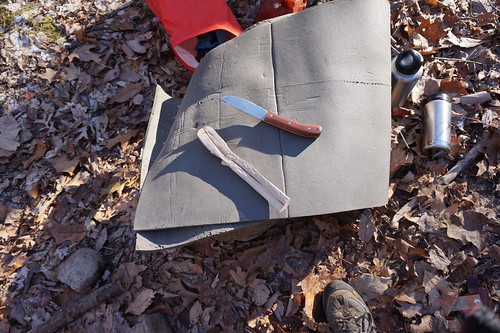 Next I cut a green stick and split that, again using the knife (this step would be much much harder to do safely with an axe). I bent the stick over to make a set of tongs 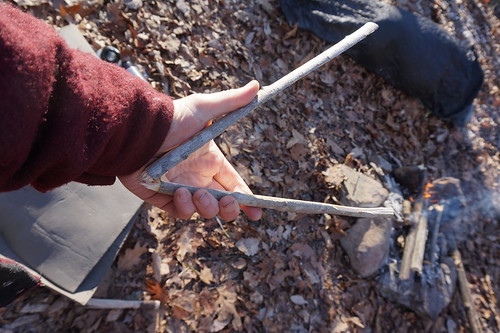 Then using these tongs I fished a coal out of my fire, placed it on the spoon and blew on it. After it got nice and chared I'd scrape the char out with a rock, and repeat. This is the process used to make what's often called a "burn bowl", this is a burn spoon I guess. 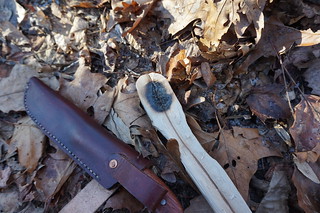 After a few iterations of this, with a little care to how you place the coals, you get a nice bowl shape 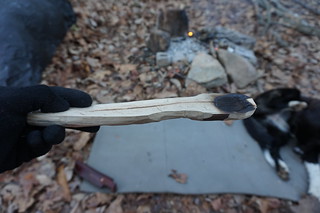 I carved it a bit more until it was sufficiently spoony that I could've used it... but there's a key flaw in this spoon which should've been obvious initially. It includes the very center of the wood, which almost always checks badly (meaning it splits while it's drying). As a result this spoon is already splitting badly, and will fail very soon, so I gave it to the dog to shred instead of saving it. Oh well, it was good practice.

To get the fire lit I first tried out a method I saw a video of someone in Switzerland using. It just made a lot of sense. It's called the "3 stick method". Well... it requires sticking the 3 sticks in the... snow... err... yeah, suffice to say that it didn't work in ground that was frozen solid. One more learning experience!

I had carried in a few bags of tea with me, since we have so few evergreens here, and I knew it would be cold. I also had 2 stainless steel water bottles (kleen kanteen brand). One is a 1 liter bottle, the other is a 1 pint thermos. This was great, as I could boil stream water in the 1 bottle, then transfer it to the thermos and sip tea while I was working on my spoon and whatever else. 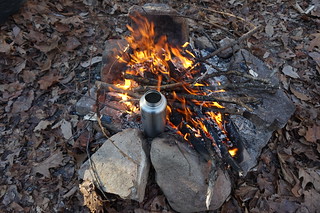 Then I cooked dinner on the fire, and just hung out. When I left home it was ~15F and I believe it dropped to maybe 5F that night, so it was pretty chilly. Beau didn't care at all though, she was running in and out of the water until this happened: 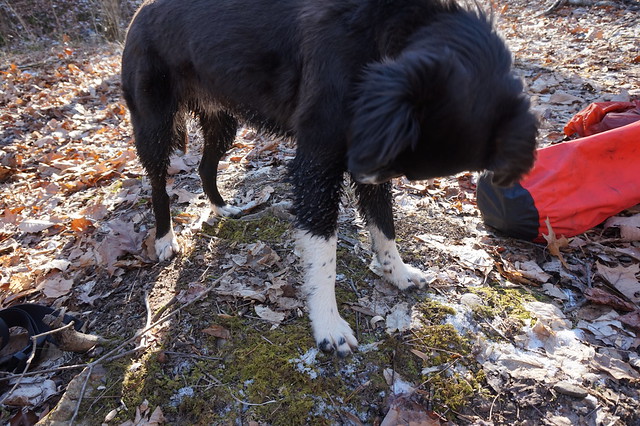 It'as a bit hard to see, but she has balls of ice on her fur all up her legs and across her belly, almost 1/4" across. She picked them out slowly, and didn't really mind much.

I was also experimenting with clothing. I decided to minimize my use of modern tech and was wearing a wool 260 weight ice-breaker sweater as a base layer, a 5.11 canvas shirt over that, with a thick wool jacket over that. My hat was wool. I had on underarmor running tights (I don't own wool tights, something I'd like to fix someday), and 5.11 canvas pants. Wool socks, and fancy modern waterproof hiking boots, lightly insulated. On my hands I had wool liner gloves and thinsulate lined 2 layer gortex mittens. In reality I would've been fine without the mittens... now I know!

Interestingly, even sitting around at 10F or so this was plenty of clothing. I was quite comfortable, especially sitting on a closed cell foam pad, and drinking hot tea. Very pleasent :D.

I carried in an extra pad for Beau, as I was worried about her getting cold at night. 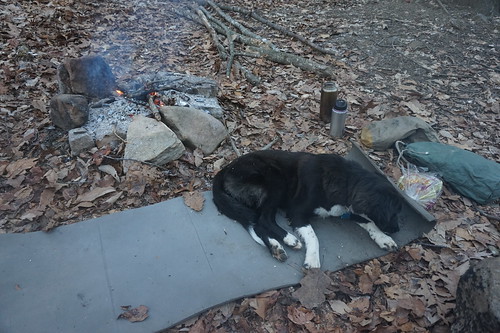 She was definitely thankful and slept on it the whole night. Unlike this picture I had it folded in half so she'd get 2 layers of insulation.

While she was sleeping on an my old beat up one (this pad has done 1500 miles on the AT, 240 on the JMT, was my bed all last summer, and has been on countless other trips), I was sleeping on my much newer pad, otherwise identical. I also made a pile of of leaves to try and get some more insulationg, knowing just the 3/8" pad (even from gossamer gear, which are better than most) wouldn't quite cut it.

Well, the dog was just fine that night, she curled in a ball and slept great. I checked her ears and paws occasionally, and they were always warm, I never once saw her shiver.

Me on the other hand, I was cold... especially when I got nervous enough to bring the dog in my bag for a few minutes to let her warm up (which was totally unnecessary). My 5 degree quilt is well used and isn't really 5 degrees anymore. It also has a hole in the bottom of the foot that I usually plug with my down vest, which I hadn't brought. I was using the quilt and my ultralight MLD bivy, another piece of gear I've been experimenting with more lately. I was in no danger by any means, I just wasn't as snug and warm as I had expected to be.

I managed to keep the fire going for much of the night... except the coldest part of course. Oh well. I also melted a small hole in my bivy and sleepingbag. This would upset me more if the bag was new, or the bivy was waterproof, but I do need to do some patching. It turns out you can't use a down bag AND warm up by a fire. I knew this, but tried it anyway. I had build the fire in a pre-existing fire-ring that raised it up somewhat above the ground, this made banking it nigh impossible, especially combined with the ground being frozen solid. The wood there is a very fast-growing oak that burns almost like a softwood. So, that's why I failed to keep the fire going.

The next morning the dog had ludicrous amounts of energy and was so manic she was playing tug-aware with the backpack after I got it on her... it looked just as hilarious as it sounds, sadly I didn't get photos. I got enough sleep to be pretty happy, and had a nice pleasant walk out.


And... best of all, I got to spend a nice 20 hours or so outside instead of inside. It was beautiful both days. It feels so good to wake up in the forest, and have the first thing you do be to pack up your stuff and start walking.