Backpacking in the Aderondak High Peaks

Angie and I decided to go out backpacking in the high-peaks. It ended up being an awesome 5 day trip, with one zero day due to a minor sprain to Angie's toe, and a sore knee.

Just to give it a try I decided to skip the sleepingbag and just bring puffies, and see how that went. I also decided to go with only 1 pint of water capacity, just to give that a try on some non-trivial mountains (well, for the east-coast anyway). Here's the gear I carried: 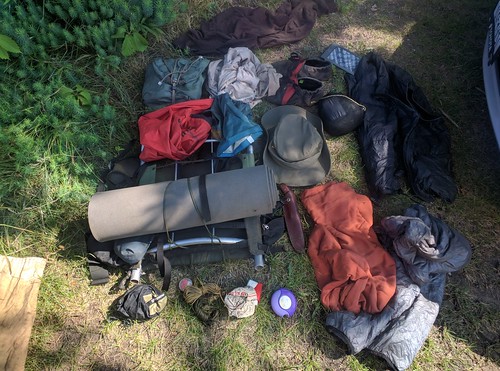 I have a sleepingpad because we were staying in the Adirondack shelters along the way, though we did have my poncho as a backup/emergency shelter should it be needed (and Angie had an emergency bivy as well). Here's the gearlist:

And here it is packed up: 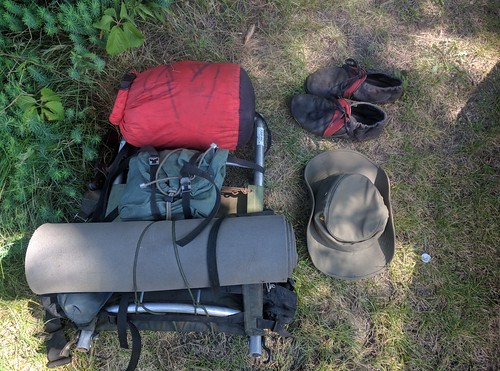 Before you're all impressed with how little gear this is... It didn't quite work. There were 2 flaws.

First, it was colder than I expected, dropping in to the 4's. I would've been *okay* with this gear for sure, but I got a little cold and borrowed a corner of Angie's sleepingbag most (but not all) nights so I could really get a good nights sleep.

Second, they don't allow fires in the high peaks region! We were not expecting this. Luckily, angie had packed a more normal cookset including an alcohol stove, so we did all the cooking on her stove, and pot and never used my kleene-canteen.

As it turned out 1 pint of water was plenty for the high-peaks, even running ridges most of the time we were out... we didn't treat which helps. We would "camel up" before going up a mountain, just drinking water straight from the stream.