Last time I posted a picture of jack, he looked like this: 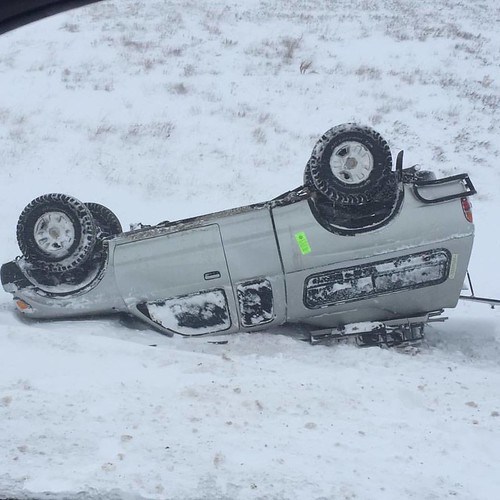 Well, picking up where that story left off, the insurance company totaled the truck. When we talked to the owner of the body shop it was at he said 20k to get it to original condition... well shit. Being a super nice guy he saw the looks on our faces and had a real conversation with us when I pressed him. After talking about what we wanted (mechanically sound and safe, but ignoring looks) he said he could do it for ~$1400... THAT sounded better to us.

It was Christmas-time, so we traveled back to our respective parent's houses by train. This consisted of: Walk 3 miles across Bismark, swap around clothes etc. at the truck, walk to bus station, leave on bus at 2am (bus is late actually 5am, get to Fargo at 8am, hang out in coffee shops, get on train next day at 2am, 2 day train ride getting in 8 hours late.

Money and paperwork
After totaling out the vehicle for about 11k, and subtracting the 1k deductible, the insurance company sold the truck back to us for a bit over $600. The tires alone are worth that. The trick is that if I buy it back, it's salvage title, so I can't insure it for collision or comprehensive... and the paperwork can get harry.

So if it's totalled I should be 4k in the black, so that gives me a lot of room for further repairs

Which comes out break even. I lost a lot on hotels, eating out, lost time, etc. I need to repair the roof-rack, bla bla, but overall... I came out a lot better than one would expect for totalling a car.

As for paperwork, I was worried I'd have to drive it back to MA for a salvage inspection. The rules on the DMV website were opaque, the insurance folks at AAA didn't know. Finally I ended up talking with our total loss representative at Mapfre and they said that because the vehicle is over 10 years old, there is NO paperwork, no inspections, nothing. That's it, we're good to go.

So, that's what we did... Being unsure when the truck would be complete Angie took the train up to my parent's house after Christmas. When it was ready we reversed the train/bus trip, picked up the truck in Bismark ND, and drove it back to my friend's house in Wisconsin. The drive back was a little exciting. First we drove from Bismark to Fargo. It was fine most of the way, but the highways in Fargo were black ice and weather looked bad in Minnesota, so we decided we were done for the day. We stopped at a motel 6 and slept for 18 hours (having not slept properly for 3 nights prior), breaking in the middle for dinner. The next morning we looked and Minneapolis was in fact a disaster as predicted, so we decided to route south around it via Sioux Falls, adding 2 hours to the drive on an ideal day. A good chunk of the road heading south was glare ice, and we did those parts at 20-30 mph, blinkers flashing as we looked out at cars and trucks that had slid off the road on either side. From Sioux Falls to Madison WI was a lot better, and we made it here by about 1am. 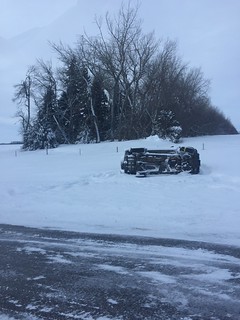 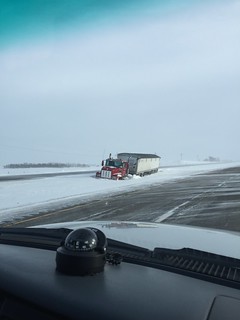 The truck So, here he is... He feels like he could use an alignment, but everything seems to be running great. This is the side that didn't roll through the snow. The remainder of the roof rack is in the back on top of the platform. 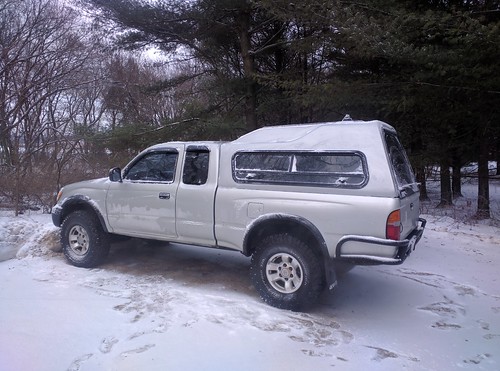 On the other side though it looks really good for having been rolled. The door didn't open properly before due to a dent in the front quarter panel, and of course the mirror was smashed. The shop popped the dent out, as well as the fender and the door itself. When Angie first tried pulling the door latch it would lock the door, but something popped back in to place and it seems to work properly now. Amazingly, the window even rolls down and back up again smoothly! 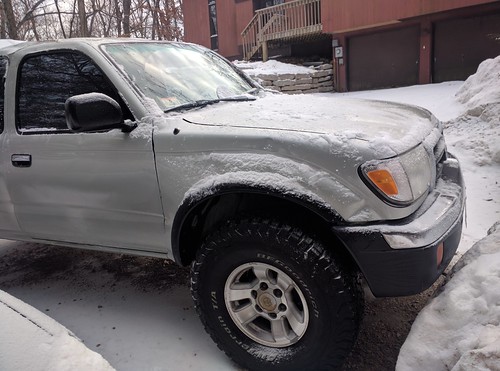 The roof of the cab took most of the damage. They shoved it back in to place and got a really solid seal around the window, but it definitely looks a little worse for the wear. I need to sand and repaint the spots that really got creased. The cab may rust through before the truck wears out now... oh well... if it does I'll have to either replace that sheet metal or do a cab swap, for now it works fine though. 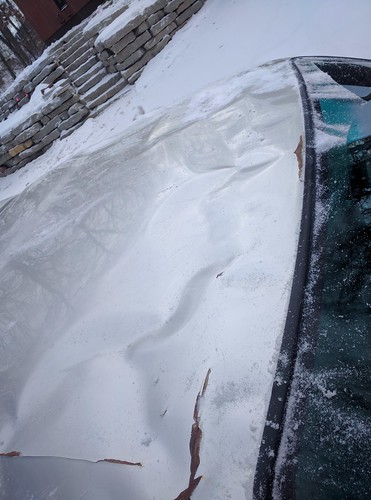 The cap lost a few little chunks of fiberglass, no biggy, but I think I'll fill in the biggest hole just to keep water from getting in there, freezing, and opening things up wider. I might just mix up epoxy and shove it in there. 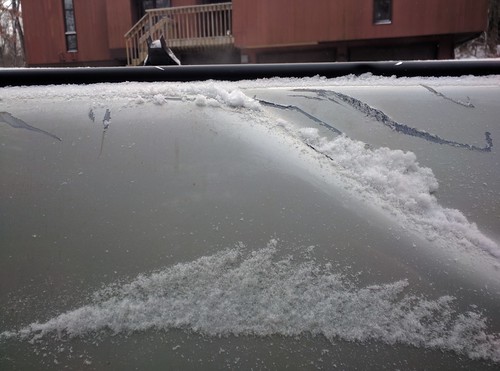 The most immediately problematic damage is a crack in the truck cap. Our theory is that we can repair this either with fiberfix or a standard fiberglass repair kit. It's an issue because the cap is twisting left, so the window doesn't close properly (as you can see here), and the structural integrity is an issue for remounting the roof rack. In theory it should be an easy fix. A major reason we headed for a friend's place is that our stuff has to go somewhere while we take it all apart and put it back together, so a garage is likely to be helpful. 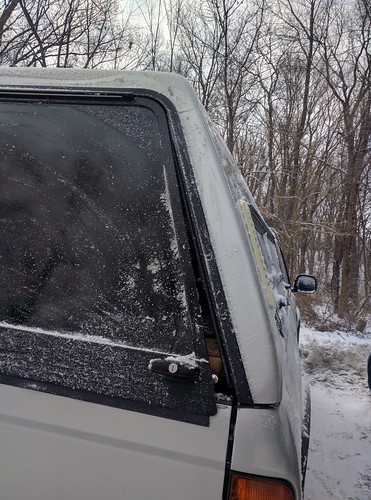 Other minor work we need to do includes checking the transmission and differential fluid levels, bending the bed sides back inwards maybe an inch, sanding and painting the dents on the body so they don't rust, remounting the right front signal properly, replacing/repairing the roof rack, replacing one storage box that got smashed, and replacing the radio antenna... but that's all minor stuff.

Jack is back, and back on the road! And with a little luck pretty soon we'll be fully operational again. Then we're heading south :D.