In the interest of understanding search and rescue in Virginia and getting an idea of which team to join I went to the Virginia Search and Rescue conference. I was one of 2 people not associated with a team, but they were welcoming and awesome regardless. The conference is basically 4 days of classes related to search and rescue. Also, they bring out all the cool toys.

I'm not sure which groups were involved (helicoptor groups are usually not directly part of volunteer search and rescue, but work closely with them), but they did a demo/practice of a couple of water pickoffs by helicoptor. Below is a photo of a litter (with a person on it) that they lifted up out of the boat below. 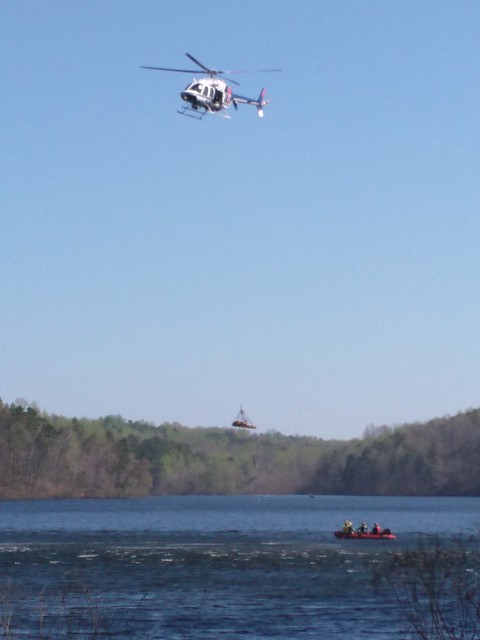 That shiny picture though has nothing to do with what I actually did at the conference. Though each time I watch a helicopter work it teaches me something about how to interact with them should I ever be involved in a helicopter rescue.

The idea is that he, with the help of a lot of organizations and people has, and is continuing to gather a huge database of where various people are found and in what conditions. He can then take this data and split it up in to various groups like altzthiemers walk-aways, children under 4, downed airplaines, fisherman, etc. The statistical models tell us, for example, how likely someone is to be near a "linear feature" (e.g. a road or a river). How far away from the Point Last Known they are likely to have gone, etc. If you can bucket a person properly you can then use these statistics to help guide your search efforts and find people faster.

That was a pretty cool class. It's dry material, but fascinating. The book is available online, but it's not something you'd read for fun, or even read at all, it's intended as a reference guide to help search base direct a search. http://www.amazon.com/Lost-Person-Behavior-search-rescue/dp/1879471396

Tracking I spent most of the rest of the time taking some tracking classes from the pre-eminant tracker in Virginia. This is man tracking, for the purpose of trying to save people, and came in form of tests. In the first test we were given 4 basically perfect shoe prints in sand, a set of 20 2 foot boxes, and 2 hours. Each 2 foot box had either one of the 4 shoe prints in it, a different shoe print, or nothing and we had to identify which. We started by looking at the 4 shoe prints. Once we moved over to the 20 boxes we weren't allowed to go back. So this is a matter of recording the shoe prints so you (or other people) could identify the shoe reliably, and then trying to actually do it. 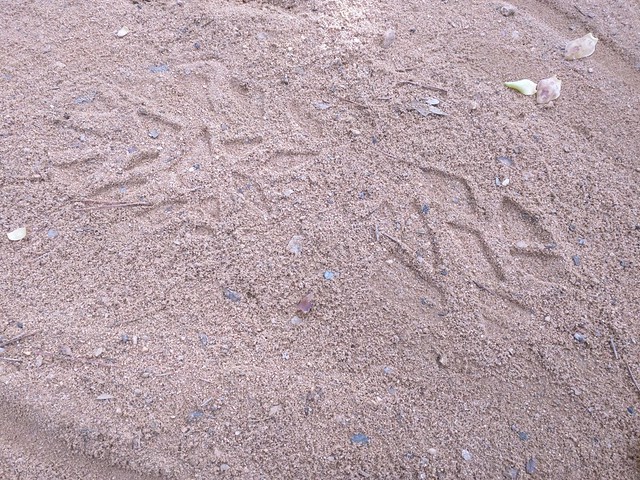 This is a nice easy to identify shoe, you can pick it out pretty reliably by a single lug in many cases. I managed to lose my measuring tape though frustratingly enough, and one of the shoes he used in a tracking box was this same pattern but in a different size.. so I missed those 2 boxes. Otherwise I actually did really well. Well enough that I'm thinking I might be worth pursuing becoming certified as a tracker for search and rescue.

We also did track aging. We were given 5 sets of tracks (around 8 or 10 steps long), and asked to identify how old each set of tracks were. We were also told they were less than 72 hours old. I did okay, but not well. I was consistently off by about 10 hours, and got one just completely and utterly wrong. This exercise was done on vegitation actually, and I realized I'd never practiced aging on vegitation (having learned my tracking in California and the Sonoran desert), so that's something to work on.

Lastly, we did less totally SAR related stuff... identifying what made various marks. Still, understanding that those 4 holes in the ground is dog sign, that funky track that's a little too close together is actually from a tractor, or that the sand configuration indicates that it rained recently can be extremely helpful.

I also went on an edible plant walk and learned a couple of new things, which was pretty cool.

Other stuff
I also did a little navigation refresher, and in the evenings I nerded out with folks on radios and the like, and we generally had a good time. I'm figuring out exactly what to do about joining a team, but I think I'll have it worked out in not too long. Virginia really really has their act together compared to most states. The training to become a basic ground pounder is standardized across the state and the next one is this fall, since I can't be active until that, there's no reason to push too too hard, but I want to figure out what team I'm joining in the next few weeks and start courting them.

Generally it was a blast. The people were great, and I learned a lot. Jess spent the whole time off with the dog people training Beau, who's making great progress. I'm really excited to work with the groups here.