This morning I started my day by driving out somewhere where I could scrape down a hide I'm working on without bugging anyone. Near noon I was throughly exhausted and hadn't finished, that's a story for another time. Anyway, I was near the archery range, so I figured I'd shoot a bit before heading off to other things. While shooting I was messing with my brace height, I couldn't get the arrows to fly straight, occasionally one would, but rarely. It seemed weird so I kept tweaking it up and down. 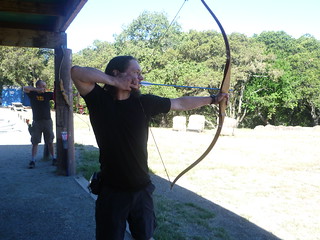 (Archery enthusiasts will note some major flaws in my form here. This is an older photo. My left wrist is collapsed and the bow is resting on my palm. My right elbow is high. My knees are nearly locked, I'm standing on my heals, and my rear leg is loaded.)

A couple of the older guys there commented "have you ever tried shooting a naked shaft?"... Jokes aside... Well, no in fact I had not. These guys know tons and tons and were kindof bored today so decided to help me out. I tried shooting one of their arrows that was unfletched, it hit the bale pointing way off to the left, multiple shots in a row... interesting. But, that was his arrows. I had some arrows that had lost their fletching too, so I went and grabbed one and shot that. Out of 10 shots, 9 hit pointing way left. In case it was my release they both tried shooting... same result. We tried increasing the brace height several times, but got no change. One of them pointed out that my knock height was also wrong, causing the arrow to hit pointing down slightly, we lowered my knock by about 1/8'th of an inch. I shot from sitting for this actually so I was at the same height as the target, making the flattness of the arrow easier to see. Next one of them realized my string was too large for my arrow knocks, he pointed out that this will completely blow the release anyway, even if everything else was right. Still it was shooting left though. I've been shooting 1916 (that's a stiffness of the arrow spine), that's what's in the picture above actually. At a 26" draw. My bow is a really nice 45 lb (at 28" draw) bear recurve. Several people at the range have fawned over the bow actually. It was a luck find on ebay. Mike Dickerson, one of the two guys, then picked up an arrow of his, stripped the fletching off and handed it to me. It was a 1716. I tried shooting that. It flew dead straight, not a wobble, and hit the bail pointing almost perfectly towards me. I shot that several times of 6 shots 5 pointed directly at me. Mike shot it, it was perfect. Then Mike grabbed a carbon arrow 25/45 spine (carbon is rated differently than aluminum). This one had fletching still. I shot it, and it flew like a dream, dead straight and right where I was pointing. Wow! Mike then sat down and made me a new string out of B55 using the Flemish twist technique. The Flemish twist, while being easy to make, also allows adjustment of brace-height by adding or removing twists from the string. I've played with this a little but Mike is incredibly good at it. It would've taken me half a day, it took mike about half an hour. The new one was 8 strands, and thinner strands than the previous. Now the arrows fit smoothly on the string. He set it to the same measurements as we'd set the previous string to as we were fiddling. 8 1/4" brace height 3/8" knock offset. The bow now feels *completely* different. The sound changed, the shock after release that runs through my left hand is totally different. And when I release the 25/45 carbon arrow goes perfectly straight. I shot that one arrow for a while before heading out. I need to make a trip to an archery shop now.

Technical nerdery (skip if you aren't interested in archery of physics)

So, for non-archery folks, lets talk about the properties of bows, arrows, and shooters. Here's a list of the interesting properties Now... why does all of this matter? Take a random arrow and a random bow and shoot it. The arrow will fly off the bow and "whip" back and forth as it flies. This "whip" makes it hard to hit anything since the arrow is literally moving left and right as it flies. An arrow can whip because of the release if you "pluck" the string and induce a sideways motion in the back of the arrow. It will retain this motion until it uses up that energy either by flexing or whipping (wind resistance). Fletching obviously helps, but, In control theory terms, the system is improperly damped so won't actually converge to straight very quickly. But, even if you don't pluck the string an arrow will have some sideways component. In reality the arrow doesn't usually come off the absolute center of the bow. It's very close, but not quite even on a "center-cut" bow like mine. So, why do arrows *ever* fly straight? It's because the arrow bends. As the string pushes on the arrow it causes the arrow to bend slightly. The arrow literally warps around the bow. such that it's center of mass follows a straight line the whole time. If the arrow isn't matched to the force being input into the arrow it will warp too much or not enough. As a result it will end up flying slightly sideways, and whip. Note that the arrows length, weight distribution, and flexability affect how the arrow flexes. Also note that the bow's exact force function, that is poundage, "speed", and brace-height also affects things. So we have a heck of a lot of variables. But, in the end it's pretty simple. Take a raw unfletched shaft with whatever tip you might shoot so you don't have to worry about the arrow correcting it's flight much (we've made the system overdamped). Shoot it and see if it points left or right. Assuming a good release. One direction means it's too stiff, the other it's too bendy. Adding weight to the tip, or length is equivalent to making it more bendy. Now, there may be no setting that makes it shoot straight. So we can fiddle with the brace-height (usually you'd actually do this first, since it's really easy). There's no science to brace-height, generally a higher brace-height will shoot more predictably, but not always. So, you go up a few twists at a time until it shoots right and "feels" good. A lot of bows will change sound drastically when you hit the sweet spot. More brace height means less distance the string travels, so in general you don't want to go higher than you have to, since your arrow will go slower. A bow that shoots well with a low brace height will tend to be a "fast" bow. Some people get obsessed with speed, it doesn't necessarily matter, but there's no reason to waste energy if we don't need to.

I've been doing archery on and off since I was maybe 13. A little while ago I learned some more of the technical details, got some books on instinctive shooting, and changed the whole way I shoot. This tuning of my setup though was the biggest change I've felt as long as I've been shooting. Everything I've done previously feels like a joke, now suddenly I can shoot arrows, and they go where I point them... no I don't point perfectly, but suddenly it feels like it'd be so easy. Years of practice, and then an hour with someone really good completely changed everything. I have another bow actually, I'm really curious how it would shoot with a few adjustments. Morals: Never trust so-called experts like archery shops. Figure everything out yourself, from scratch, systematically, if you possibly can. Don't assume you just suck :P. Find someone you trust, who actually knows what they are talking about, and get a couple of hours of their time. Suddenly everything is different. I'm excited... it's so different I need to practice a bit, but it feels like pretty quickly I'll be good enough to hunt deer.