Most people are not aware, but most camping gear is required to be covered in fire retardants to be sold in most states in the U.S. This is also true of furniture and other things, but for this post I want to talk about camping gear.

If you weren't aware, back in the eighties a researcher discovered that the fire retardants in children's sleepware was carcinogenic... very carcinogenic. The fire retardants were banned a while later, but companies were still required to make all these products fire retardant. So, they changed the non-active portion of the chemical a tiny bit, so it counted as a different chemical, then that was banned, etc. This has been going on ever since with no meaningful change. So, in short, most things that are flame retardant are a problematic...

That was a bit off-topic, getting back to the point, I've been playing with all of this gear made from bed-sheets which I *believe* don't contain fire retardants, though I could be wrong.

I decided to run a quick test to see how paranoid I should be about accidentally lighting my gear on fire, so here we go:

This is 800 thread count egyption cotton which *probably* doesn't have flame retardant. One wastreated with bees-wax, mineral spirits, and a small amount of pure unboiled linseed oil, the other was just the raw material.

First I tried dropping a spark on to both materials, neither of which lit on fire. Here's the treated one afterwards. 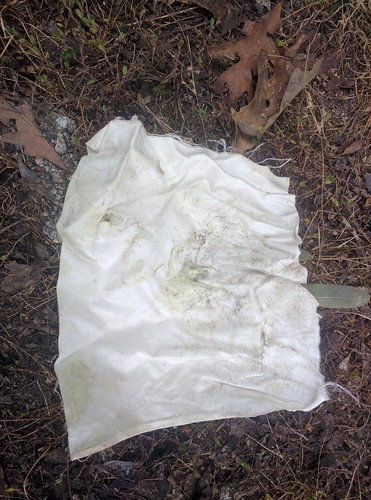 Next I got out a lighter and lit both of them, it took a few seconds actually. On the left  is the treated one, on the right is the untreated fabric.
I lit the matrial on the left first then a bit later the material on the right (it took me a couple tries). 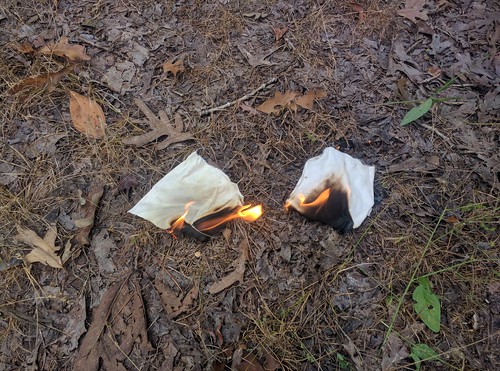 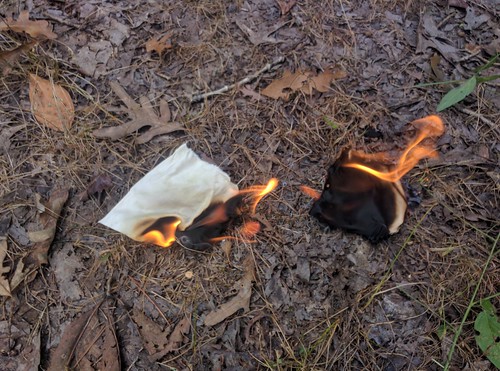 So, contrary to what I've been hearing on the internet, this treatment *improves* the fire retardancy of the material... THAT is pretty interesting. The untreated cotton burned about twice as fast.

Next, just as an interesting cross-check I cut a patch (the inside of a pocket actually) off an old worn-out raincoat. This rain-coat is a fancy membrane style water-proof breathable jobby: 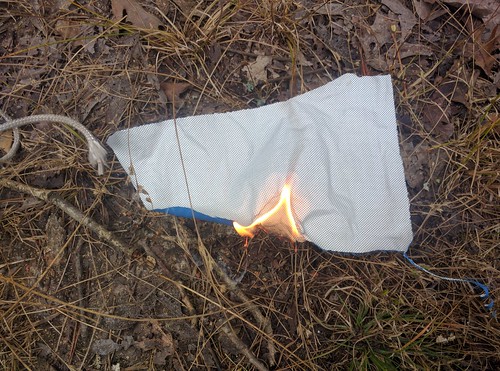 This burned in (by my estimation) about half the time that the raw fabric burned, and lit more easily.