First, some quick climbing terminology. There are 5 major types of climbing


Bouldering is just going up low things with a crash bad. The falls are low and you hit a pad when you land.
Topropping is where you have a rope hanging off and anchor at the top of the climb before you start. A second person belays you so if you fall you just drop a little, the rope stretches a bit so on a taller climb you might drop 4 or 5 feet max.

Sport climbing is where there are periodic bolts in the rock with rings mounted to the top. You drag a rope *behind* you. As you climb you snap carabiners in to the bolts, and then around the rope. If you fall you fall past the last bolt you clipped in to, then keep going until you use up the rope slack. So, if the bolts are 8 feet apart and you fall while clipping to the next bolt, you drop 16 feet plus rope stretch or 20+ feet. 30 foot falls are not unheard of.

Traditional climbing (usually shortened to trad' by climbers) is where the goal is to get up the rock. It's possible no-one has been up it before, so there is nothing already there to help you, and you can't walk to the top (conceptually at least). People used to ram pitons (basically flat'ish railroad spikes) in to cracks, but that was banned and is no considered bad form, as it damages the rock. Instead, as you climb you place "pieces" the most common being nuts and cams in to cracks in the rock, and you tie to them like you do the bolts in sport climbing. Thus if you fall, there's something to stop you from dying... hooray!

Thing is, in trad climbing, if you don't place the gear right, or if you just get unlucky, a piece can pull out (this *can* happen in sport too, but it's much more rare). There's a lot of detail to what you place where and how, and if you don't do it right you don't live very long.

What we did
So, yesterday, Angie and I completed our first trad climb. I "lead" the climbed (meaning climbed up dragging the rope behind me and placing pieces), with Angie belaying me from the bottom, placing "pro" - short for protection, that is, sticking things called pieces, in cracks in the rock and clipping them to the rope with Carabiners. When I reached the top I set an anchor on a tree (meaning put some webbing around the tree with Carabiners) and Angie lowered me down. Next, I belayed her from the end I'd been lowered on, and she climbed the same route, following the rope as it snaked through the Carabiners. She removed the pieces as she went. This is called "cleaning". When she reached the top she removed the anchor and pulled the whole rope up to the top. She then found the middle of the rope, slung it around the tree I'd used for an anchor and rappelled down. Lastly, we pulled the rope by one end until it fell - thus ending up at the bottom with both people, and all the gear.
Below is Angie on that rappel at the end. We didn't take pictures sooner because we were busy keeping each other safe as we each climbed in turn. 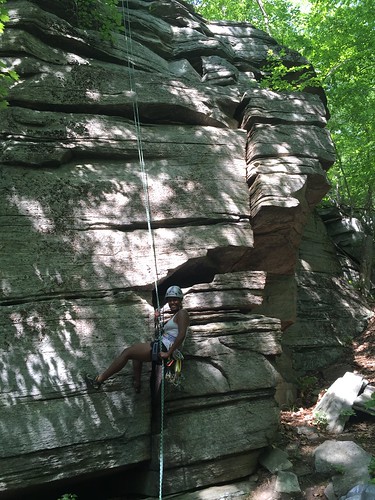 The route we climbed is actually just to the right of where Angie is rappelling. It's a fairly easy route at a 5.4 rating... perfect for our first trad climb. I needed to be thinking about putting pieces in properly, not whether I'd make it to the top.

Earlier that day we'd done another route where I was on a top-rope, but was setting pieces *as if* I was trad climbing, dragging a rope and clipping it in. I removed them when Angie lowered me down. On that practice run I realized I hadn't placed enough pro and had I really been trad climbing there was an opportunity for me to fall and hit a ledge... oops! That's why I was practicing though, to figure out those details before my life was on the line.

Being our first trad climb, and after the previous experience, I was pretty conservative, placing 5 pieces on this short stretch of rock. As I get more confident, take some falls, and learn what I should and shouldn't trust, I'll be able to use my pieces more judiciously. For now, safety was the goal.

What did it take to get here?

I did not take the fastest route to get here. I've been climbing off and on since 2003. A friend taught me how to clean clean and a bit of placing pro in 2008. Another friend showed me more in 2009. I tried to join a SAR team and learned self-rescue techniques, and more about pro placement and anchors ~2010. I took a high-angle rescue class in 2013 where I learned more anchors and placing pro again. Recently I finished reading Climbing Anchors to really solidify what I know. Last month while Angie and I were climbing at Seneca Rocks I did a route practicing placing nuts (still on toprope). And lastly, just a couple of weeks ago I finally finished building up a full rack.

A lot of people go and take a class, but that's just not my style. I like learning from books and the internet, and having already learned bits and pieces from half a dozen different people I figured I could put it all together.

It might be noted that this was also my first lead route, I'd never actually lead a sport climb before this. So, I also had to watch things like back-clipping, and z-clipping... but again, I'd learned about these issues already from friends and such. So, I decided to just go do it, but just be ultra-careful.

Here's the gear I have now: 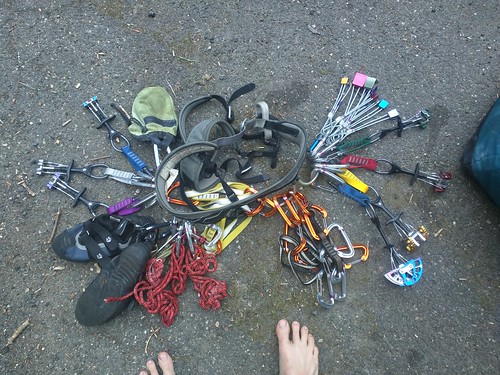 There are many websites covering what you need, and I read several. What I have is:

Not pictured are
I also have other bits of gear of course, like a scarab, 4 locking steel beaners, 2 30ft lengths of webbing and some shorter pieces, a couple more 30cm slings, a 3000lb rated length of static rope, a pair of sailing gloves, etc. Some of these are for other sports, some are for topropping certain routes, and some I might swap in on the right route.

Obviously to climb with a belay you need two people. Angie also has a self-rescue kit, belay device and beaner, shoes, chalkbag, and harness.


The "pieces" I was placing as I climbed were those nuts: 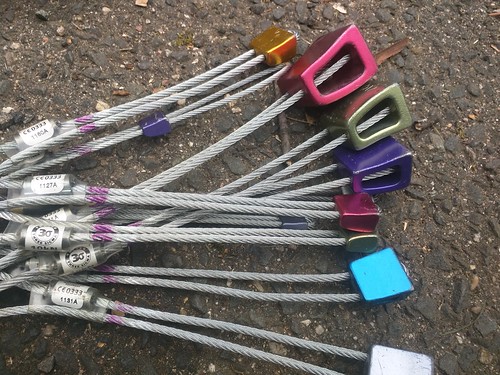 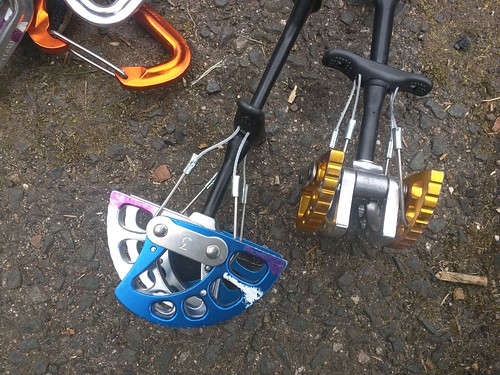 Nuts are cool because they are SO simple, there is just nothing there to fail, but they are also hard to place in that they have to fit in just the right indentation, and only work in smaller cracks.

Cams are cool because you can place them even in slightly flaring cracks, because they hold themselves in place... and indentation is still better, and contrary to popular belief you *do* need to be quite careful placing them, but they are a definitely more forgiving.

I honestly don't know how much the whole kit cost, A full set of camelots is ~$430, beaners and slings add up fast. My alpine's were built my disassembling some normal quickdraws a friend got me some years ago and replacing the webbing with slings. My rope and nuts were also gifts. The harness purcells, chalkbag, and belay-device I've had quite a while (I did inspect them, they're fine).

Why is this exciting?
There aren't that many sport routes around, a lot of people think it's marring the rock and ruining things to put in bolts. There are also a lot of cool routes you can't climb to the top of, so being able to trad opens the door to a lot more cool opportunities.

The next step is "multipitch" where I climb partway up a route, set an anchor, and I belay Angie up from there to where I am, then we climb again. This is even cooler routes, and gets in to all-day climbs and the like.

Obviously there's also pure free climbing skill, that is, the skills of going up the rock, and getting better at that will keep opening up new opportunities, but getting in to trad is a big hurdle that we're finally crossing and I'm pretty excited about it.

Here's some other photos from the same day: 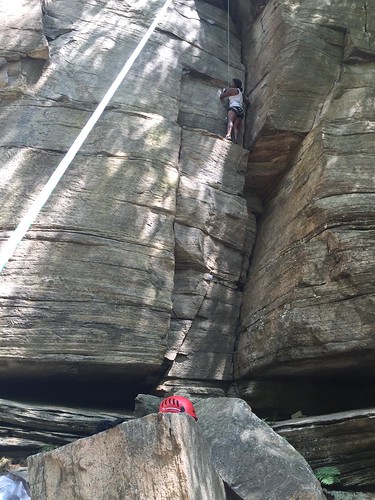 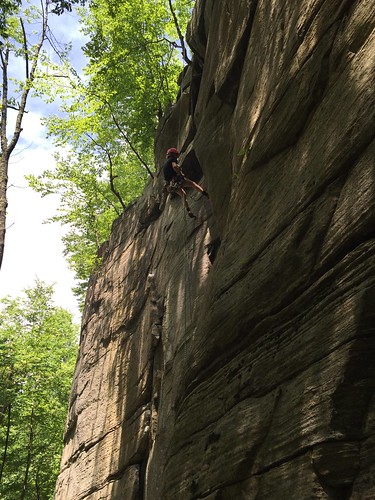 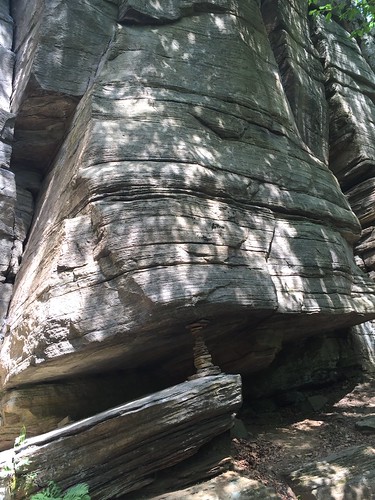